Which country dominates the lithium-ion supply chains in 2020?

As the world begins to shift towards renewable energy technologies, with the demand for EV experiencing a boom in many countries, the lithium-ion manufacturing capacity becomes a market of growing importance to companies around the world.

Japan and Korea follow at two and three on the ranking respectively. While the two countries do not have the same influence in raw materials and refining as China, they have been consistent leaders in battery and components manufacturing, as well as excel in higher environmental and RII (regulations, innovation & infrastructure) scores compared to China.

Australia, one of the few countries with secure access to materials needed for lithium-ion production, ranks only 11th on the list. Based on the country’s current development trajectory, BNEF is not predicting any growth over the next five years. Currently, Australia’s environmental score sits poorly at 21.

“China’s dominance of the industry is to be expected given its huge investments and the policies the country has implemented over the past decade,” said James Frith, BNEF’s head of energy storage.

Frith said that Chinese manufacturers, like CATL, have come from nothing to being world-leading in less than 10 years.

Although the rankings are currently dominated by Asian giants, BNEF’s forecast shows that Europe and the U.S. will be shooting up the rankings by 2025.

“The next decade will be particularly interesting as Europe and the U.S. try to create their own battery champions to challenge Asian incumbents who are already building capacity in both places. While Europe is launching initiatives to capture more of the raw material value chain, the U.S. is slower to react on this.”

In Europe, the boom in cell plants owes to the growing need for cell manufacturing facilities close to automotive production to meet increasing EV. Now, the rest of the lithium-ion battery supply chain is slowly making its way across the regions.

According to BNEF, the growing industry coupled with Europe’s robust environmental credentials paved the way for five European countries to earn their place among the top ten rankings for 2020.

While the BNEF ranking is based on a country’s current trajectory, it is still possible to improve positions through implementing targeted policy and regulations.

The U.S. may yet to improve in the rankings, depending on the upcoming presidential elections. For instance, if the country increases its investment in raw materials and promote EV adoption, Bloomberg believe it has the capacity to surpass both Japan and China.

On the other hand, the U.K., currently sitting at 7th place, may further fall from the rankings in 2025 if it is unable to access the 152GWh demand in continental Europe, which is five times bigger than U.K.’s own domestic market. 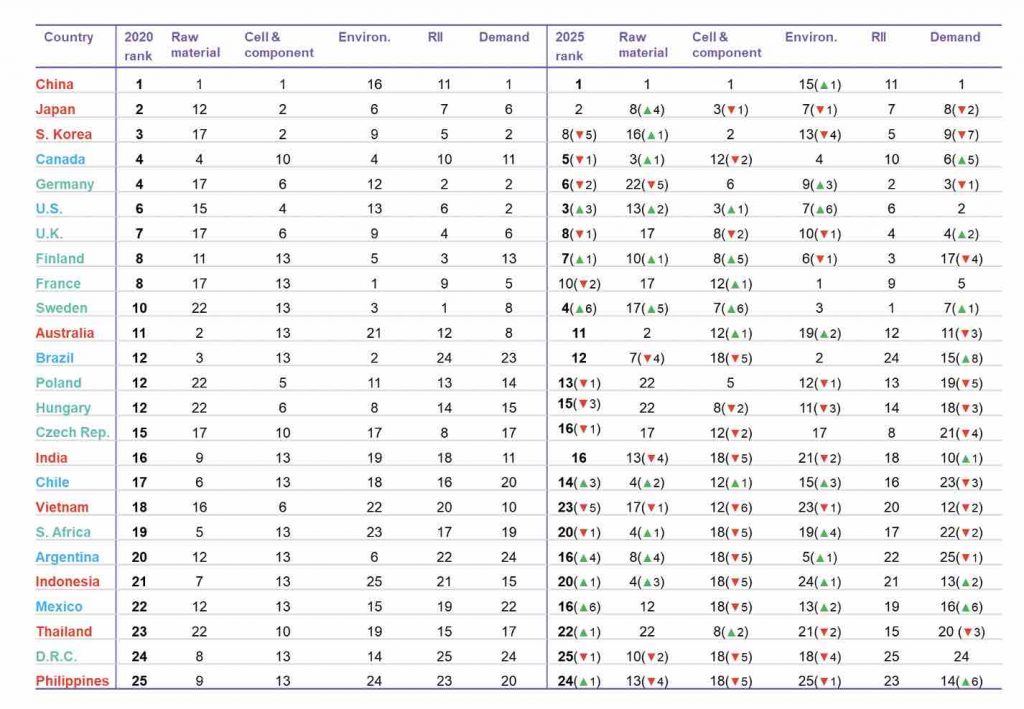 “A key concern of many raw materials producing countries is how to leverage resource wealth into more value-add, and attract further downstream investments, like battery manufacturing,” said Sophie Lu, head of metals and mining at BNEF.

Lu continued that key distinguishing factors are the environmental footprint of industry, the availability of cheap but clean electricity, a technically skilled labour force, and incentives driving battery demand. These factors, she said, may be more important than a monopoly on one specific critical metal.

BNEF also stresses that sustainability and carbon emissions are becoming increasingly important in the lithium-ion battery supply chain, such as using low-carbon electricity in material processing and cell manufacturing.

The report shows France to be the best in the environmental category, owing to its electricity grids’ 28gCO2/kWh electricity low carbon emissions factor in 2019.

Bloomberg also believe that introducing carbon border taxes, as proposed by the European Commission and Joe Biden, the U.S Democratic presidential candidate, is a move that will help regions and countries leverage to secure localized supply chains.

Ampofo said that in addition to making significant investments into mining of critical minerals all around the world, China is also the dominant player in materials refining, giving it the advantage over Japan and Korea.

“Other countries seeking to be dominant players in the overall value chain may need to support upstream metals mining and refining development, while also formulating policies that will safeguard the environment,” he said.

BluJay Solutions welcomes Rick Medlock as chairman of the board
Zoe Sabanal Mar 22, 2021

BluJay Solutions welcomes Rick Medlock as chairman of the board

First round of Moon to Mars grants target supply chains